Problem Every year, Danielle Santos sells 59,520 cases of her Delicious Cookie Mix.  It costs her $2 per year in electricity to store a case, plus she must pay annual warehouse fees of $4 per case for the maximum number of cases she will store.  If it costs her $747 to set up a production run, plus $6 per case to manufacture a single case, how many production runs should she have each year to minimize her total costs?

Solution Start the table by labeling the columns:

You can click on the table to view a larger image.

This is mostly the same as in the text. However, the warehouse fees are new. Since the fees are $4 times the maximum stores in the warehouse at any time, we get 59520 ∙ 4.

I hope you see the pattern emerging. Let’s fill in the last row:

The total cost function in ? is the sum of all of the individual costs or

After simplifying this function, you can find its minimum by taking the derivative and setting equal it equal to zero. This will give you the critical number that you can then verify using the second derivative.

As the maximization and minimization problems become more complicated, using a table to organize examples of what is being modeled becomes more and more useful. Let’s look at another example of how this might work.

Problem A rectangular container with a square base, an open top, and a volume of 8788 ft3 is to be constructed of sheet metal. Find the dimensions of the tank that has the minimum surface area.

END_OF_DOCUMENT_TOKEN_TO_BE_REPLACED

A tangent line to a function is a line that looks most like the function at a point. In common terms, it just grazes the function. 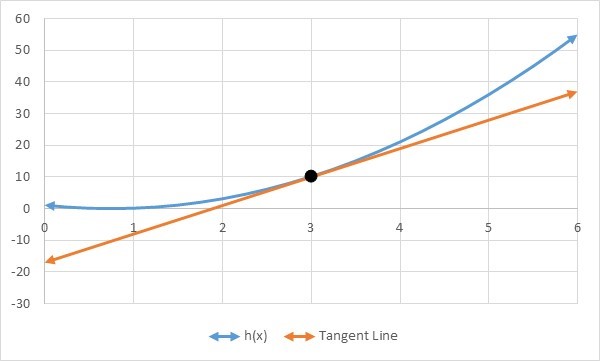 To find its equation, we need to locate the point where the two meet as well as the slope of the function at that point. Then we can use the slope-intercept form or point-slope form of a line to get the equation.

Find the equation of the tangent line to

Since this problem is asking for the equation of a line, let’s start with the point-slope form

This requires a point (x1, y1) and slope m. We’ll use the function to get the point and the derivative to get the slope of the tangent line.

Find the point: We are given a point x = 3. To find the corresponding y value, put the x value into the function

The slope of the tangent is

Write the equation of the tangent line: Putting the point (3, 10) and the slope 9 into the line yields

If you are asked to write this in slope-intercept form, you’ll need to solve this for y to give

If you graph h(x) and the tangent line together, it should be obvious that your tangent line is correct (ie. tangent).

In the problem below, we are given a model of revenue for Verizon, a national wireless carrier. To find the rate, we’ll need to take the derivative of the revenue function.

From 2006 through 2011, Verizon Wireless grew steadily. As the number of connections increased, so did the revenue from those connections.A cubic model for the revenue over this period is

where c is the number of connections in millions. 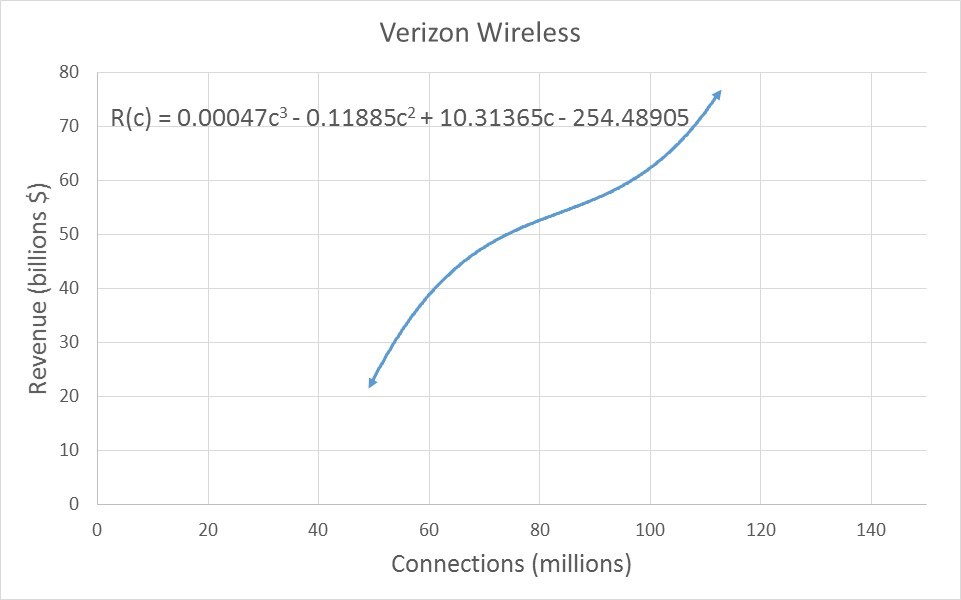 At what rate is the revenue increasing when there are 80,000,000 connections?

Questions that ask about rate or refer to “marginal” are questions about the derivative. In this case, it is referring to the value of the derivative at c = 80. The derivative of the revenue function is

The value of the derivative at 80 million connections is

To find the units on this rate, recall that the derivative is also the slope of the tangent line at c = 80. The slope of this line has vertical units of billions of dollars and horizontal units of millions of connections. This may be simplified to

Since a billion divided by a million is one thousand. So

means that an additional connection at this level results in an increase in revenue of 0.31265 thouusand dollars or $321.65.

From 2006 through 2011, Verizon Wireless has grown steadily. The table below illustrates the growth in revenue as well as connections (phone numbers). A cubic model for this data is

When we place the model on the scatter plot, we see that the model fits the data well. Set the second derivative equal to zero and solve for x:

Label this point on a second derivative number line.

Now test points on either side, at 50 and 100, to find the sign of the second derivative.

Label the number line with – and + to indicate the sign of the second derivative.

Now we can label the concavity on the number line.

Since the concavity changes at approximately 84.3, it corresponds to an inflection point. Its position on the graph is found by substituting 84.3 into the original function.