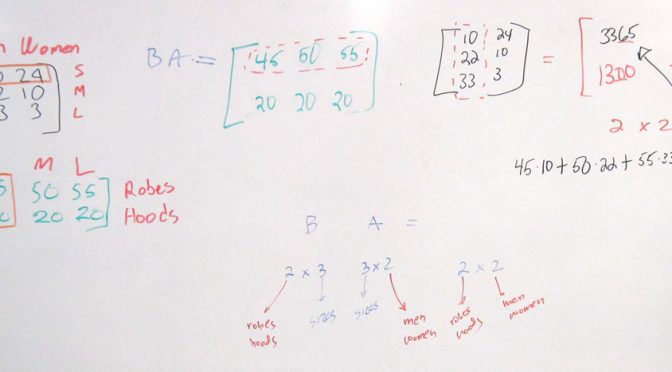 Back around 1980, I got my first computer. As I recall, it had the brand name Sinclair and it was connected to a little black and white TV we had in the basement. It had a minimal amount of memory, but I could save programs to a cassette tape connected to the IO port. That computer found its way to a landfill in Alaska a long time ago. It amazes me that almost every one of my students (as well as myself) carries a small computer in their pocket that is hundreds of times more powerful than that old Sinclair. Not only is it more powerful, but my smartphone fits in the palm of my hand. It also amazes me at the growing number of uses a smartphone has in the classroom. Over the past two years I have organized the students in my classes into teams. Over time, I have been more and more careful about how I assign students to teams. Random assignment of students is not nearly as effective as a systematic assignment based on a questions in a form. I administer the form as Google form and ask questions about leadership, technology, and their preexisting notions of team learning.

One of the primary tasks I give the student teams is to work in class at the board on problems. Typically I introduce the topic in 10 minutes or less including one basic example. Then I send the students to the board (all at once) to solve pairs of problems as a team. The focus is on solving the problem and documenting the process so that the work on the board would be useful later. In effect, I want them to construct notes on the board using all the brains in the team.

As the teams work at the board, I circulate among the teams asking questions of the team members about the work they have created on the board. I use this opportunity to try to include team members who may be on edge of the group and not really contributing. I will ask them for details on the work and if it is not clear, what needs to be added? Often I will ask them to add to what is already there if something is not clear. Eventually, each team creates a correct version of the example.

In my early attempts at this type of team work, students wanted to transcribe what they had created into their notes. This slowed down their progress on the problems and limited the number of problems we could get through during a class period. Also, have you ever looked at the notes students write down? You may think that your brilliant board work appears clearly in their notes, but they do not. Looking over the notes, I noticed that students often transcribe what is on the board poorly.

This is when I began to take pictures of their work and post it online. Not only did the boards appear exactly as they created in class, but it also freed up time in class and allowed the groups to cover more examples in class. Often the groups can cover almost as many examples as I can in class. But now the students are in control of doing the examples. They include the information that they think they will need to do the problem later.

Taking pictures of the boards with my digital camera was tedious. Instead of taking pictures of every board, I rapidly realized that I would focus on the best examples to reduce the number of pictures I would need to take, download, modify, and then upload back to my class. Keeping up with capturing and posting 10 to 20 examples in each of my classes for each class meeting was tough. Most pictures require some correction to increase the brightness or crop out extraneous parts of the picture. I needed to streamline the process.

For me, the answer was to utilize my Android smartphone and its camera. During the class, I continue to take pictures, but now I use the camera on the smartphone. At the end of class, I open the Gallery App and view the picture.

At the top of the screen, you can see an icon for Google Drive. By selecting this icon, you can send the file to your Google account.

I always make sure that I connect to a WiFi network since uploading all of the pictures can take a sizable bite out of meager data plan. Once the pictures reside in Google Drive, I can download and modify the pictures using whatever software I choose. I use Snagit by Techsmith to do this. Although Snagit is designed to do screen captures and make screen videos, it also includes a basic image editor that may be used to clean up images. Once the Snagit editor is open select File and choose Import from Google Drive.

This selection opens your Google Drive folder. Select the image file and choose OK. The image file will open in Snagit. Now you can annotate and correct the image using the Snagit tools under the Tools tab or Image tab. This process enables me to quickly download and process the images of the board.

As you might expect, each team’s board work improves over the semester. Initially, their boardwork is monochromatic. They are simply interested in getting the correct answer, not understanding the problem. Initially color may be an aesthetic choice or be used to separate the parts of a problem.

I emphasize the use of color and annotation in board work. Color has a purpose and it not to make the board pretty. Color helps to emphasize portions of the board: a value that needs to stand out or algebraic operations on an equation. Annotations help the student to remember their thinking when they were working the problem out. About half way through the semester, most teams turn the corner. I would have never dreamed that technology would evolve to such a level where the traditional idea of note taking could become obsolete. Now students can focus on paying attention to what is done in class and constructing knowledge by collaborating with their classmates and instructor. These are key ingredients to increasing the retention of that knowledge.